Marnie Turner has devoted her career to workplace education programs with adults. She is a strong advocate for life-long learning and has been instrumental in the success of Joint City/CUPE Essential Skills Program. Marnie Turner was awarded the 2006 Canadian Association of Municipal Administrators (CAMA) Award of Excellence for Municipal Workplace Literacy Achievements in the category of "Recognition of Educators, Practioners or Organizations/Municipal Partners". 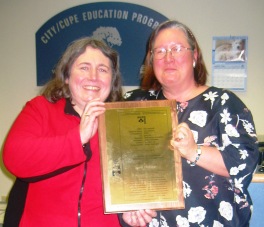 Dayna Paltridge, a CUPE Local 500 member was awarded the 2005 Canadian Association of Municipal Administrators (CAMA) Award of Excellence for Municipal Workplace Literacy Achievements for the category of "Learner Achievement". 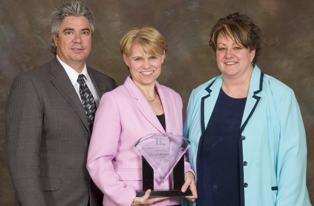 The City/CUPE Joint Education, Training and Staff Development Committee was recognized with the Gold Level Award for organizational excellence from the Human Resource Management Association of Manitoba (HRMAM). The HRMAM award was given for the Joint Committee's submission "Learning Together Through Partnership" which recognizes those organizations "that have successfully demonstrated leadership in HR programs or services by creating, developing and implementing related initiatives that have resulted in significant and measurable benefits."

The Joint City/CUPE Education Fund was nominated for the Community Leadership Award and was named as a finalist for the 2004 Canada Post Literacy Awards.

Bill Baily a CUPE Local 500 member, was awarded the 2004 Canadian Association of Municipal Administrators (CAMA) Award of Excellence for Municipal Workplace Literacy Achievements for the category of "Learner Achievement".

This award honors cities that have shown leadership and long-term success in the field of workplace education. The awards were presented at CAMA's Annual General Meeting on May 25, 2005 in Edmonton, Alberta. Members of the Senior Steering Committee accepted the awards on our behalf.

This was the second time the fund won a CAMA award and the evaluation team members were very impressed with the model developed within the context of the Letter of Understanding between the City of Winnipeg and CUPE Local 500.

Development of Effective and Successful Partnerships

This was the first of many awards for the work carried out by the Joint Education Committee.