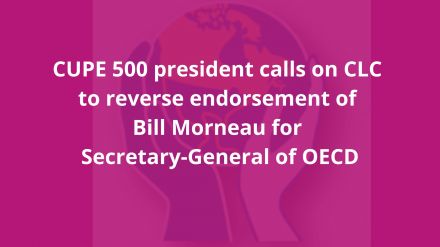 CUPE 500 president Gord Delbirdge is calling on the Canadian Labour Congress (CLC) to reverse the endorsement of Bill Morneau for Secretary-General of the Organization for Economic Co-operation and Development (OECD), calling the move "a betrayal."

The endorsement, which was done jointly with the Canadian Chamber of Commerce, did not have the agreement by the CLC member unions.

"Bill Morneau is a man who attacked defined benefit pension plans so that he, himself, could personally gain." said Delbridge. “And this is who the so called leadership of the CLC is backing?"

Among other reasons for his opposition to the controversial endorsement, CUPE 500 listed the following factors: supported legislating postal workers back to work, failed to ensure federal employees were paid properly or on time, has dragged his heels on strengthening the Employment Insurance program, childcare investments, legislating pharmacare and multiple ethical failings, including the WE scandal.

"In our view, this would not be Labour's person of choice,” said Delbridge.  “The lack of judgement it takes to get behind this, without so much as checking in with the member unions, is really startling."

CUPE 500 is joining CUPE National and many other labour bodies including local unions, labour councils and national unions right across the country in calling the move “disappointing.”

"When one person who purports to represent labour and works against working people, it’s up to all of us to speak out,” said Delbridge. "Canadians need to know, this endorsement does not represent CUPE 500's views."

Click on the links below to read statements by other labour bodies and unions who have rejected the endorsement by CLC: