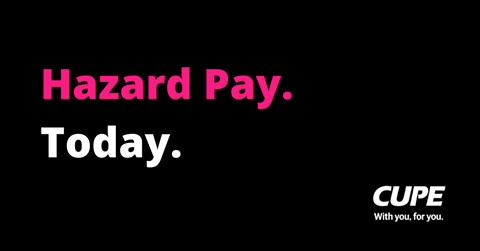 Manitoba’s largest union is calling on the Provincial Government to implement a “Hazard Pay” program for front-line workers who work in close contact with communities, individuals, and worksites at higher risk of COVID-19.

“Front-line public and non-profit sector workers are being asked to work in environments that put them at higher risk of contact with COVID-19. They are answering the call to serve our community, and are truly Manitoba’s heroes,” said Abe Araya, President of CUPE Manitoba in a letter to the Premier.

“CUPE believes that these front-line workers deserve our Province’s support by implementing “Hazard Pay” to recognize the new challenges they face on the job”.

On March 22nd, Sobeys launched the “Hero Pay Program” to recognize the value of the front-line grocery store workers at Sobeys, Safeway, and other private sector grocery stores. Sobeys “Hero Pay Program” offers an additional $2 per hour on hours worked over 20 hours a week, and a $50 per week bonus for all workers. Loblaws had previously announced a similar $2/hour hazard pay increase for their employees, also retroactive to March 8, 2020.

CUPE believes a Hazard Pay package can and should be developed for Manitoba’s front-line public sector workers, and those who work on the front line in the non-profit sector who are also putting themselves at risk every single day for our community.

Should the government declare any private sector workers as “essential services” during the COVID-19 pandemic, those workers should also be entitled to hazard pay.

CUPE Manitoba also launched an online letter-writing campaign to the Premier calling for fourteen (14) paid sick days for all Manitoba workers during COVID-19. Almost 1,000 letters were sent to the Premier over the weekend.