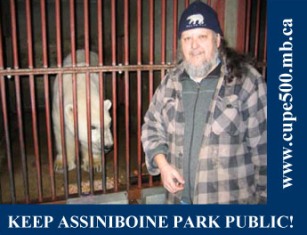 The city wants to create a new governing body to raise private and public money to make improvements to Assiniboine Park. This new governing body will be represented by the city, province and by the three non-profit groups currently operating in the park. If this happens, the park will be managed and run by a not-for-profit board!

CUPE Local 500 is dedicated to respecting the park’s history and tradition and is committed to preserving CUPE jobs within the Park. The current proposal, if adopted, will only honor the existing CUPE Collective Agreement for one year—that’s it!

What is the union doing?

CUPE Local 500 will be actively opposing the proposed governance model through our “Keep Assiniboine Park Public” Campaign. We believe that with the support of our members and public, we can change the direction of the proposed model.