Following a significant campaign by CUPE 500, the City of Winnipeg took one step closer to implementing a Living Wage Policy for city workers and contractors delivering city services.

Following a report from City Administration that highlighted other jurisdictions which already have Living Wage policies, EPC voted to prepare an implementation plan for a similar policy for Winnipeg.

“We are calling for a Living Wage Policy not only for our own members, but for the private contractors and subcontractors that do work for our city”, says Gord Delbridge, President of CUPE Local 500.

“We are also calling for a Living Wage Policy to help lift marginalized Winnipeg citizens, including young people, women, Indigenous, and racialized workers out of poverty while they are doing work for our community”.

Currently 13% of civic staff and contractors earn less than $15 per hour, many of whom are women, young, Indigenous, or racialized workers.

CUPE 500 commissioned a poll during the election which found 81% of Winnipeggers support a Living Wage Policy.

CUPE 500 has also been pushing to include non-unionized contractors and subcontractors in the Living Wage Policy, a move Delbridge hopes will lift all those working on projects for the City of Winnipeg out of poverty-level wages.

While the Motion passed 6-1 to conduct a cost review of implementing a Living Wage Policy for the City of Winnipeg, the cost of doing nothing means that some city staff and many private contractors working for the city will continue to be at risk of living in poverty.

“A Living Wage Policy for Winnipeg needs to happen now. We believe that nobody should work at poverty-level wages, and for these workers, every day matters.”

Why is CUPE campaigning for a living wage?

Many of the people who deliver city services don’t make a living wage.  We believe that these workers, whether they are city employees or contractors, deserve to be able to pay their bills and feed their families, just like everyone else. Our next city council should act to make Winnipeg a Living Wage Employer so that all city workers and contractors earn a living wage.

CUPE and the labour movement have long advocated for fair and living wages across the country in both the public and private sector. Since we are in a municipal election, we felt that now is the right time to put this issue front and centre.

As part of our campaign, we’re calling on all city council and mayoral candidates to commit to making Winnipeg a Living Wage Employer and adopt a living wage policy.  We want as many council candidates as possible to support a living wage so that we can hold them accountable after the election.

What is a Living Wage?

A living wage is the hourly wage needed to provide the income necessary to pay for basic needs such as rent, food, transportation and childcare. A living wage is a bare-bones calculation and  does not cover many expenses like debt payments or savings for emergencies or retirement.

A living wage is not the same as minimum wage or necessarily a fair wage. The minimum wage is the lowest wage employers can legally pay workers according to legislation or contract.  The living wage sets a higher standard – it reflects what earners in a family need to bring home to support their families, based on the actual cost of living in a specific community.

Using data from 2016, the Canadian Centre for Policy Alternatives - Manitoba Office, calculated the Winnipeg living wage as $14.54/hour.  Because of increasing cost of living since then, we are calling for a $15 hourly wage from the new city council.

Why is it important for the City of Winnipeg to become a living wage employer?

The City is a major employer that provides vital services in our community that we all depend on every day. Sadly, some of those people providing those services earn very modest wages – less than the basic costs of living in our community.

Why are you targeting municipal council and mayoral candidates?

Elections are the perfect time to speak up for working families and advocate for a living wage. During the election campaign, mayoral and council candidates will be knocking on doors, talking with Winnipeggers about their priorities for our city.

We know from talking with our friends, families and neighbours, people believe it’s important that the workers who serve our communities earn enough to be able to afford to live in them.

How can I support CUPE’s Living Wage Campaign?

Listen to the Radio Ad 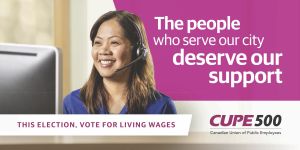 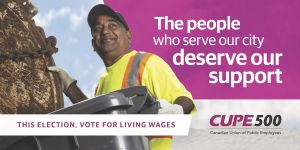