CUPE Local 500 > Campaigns > A Winnipeg that works for you

On October 26, voters will choose their municipal representatives for the next four years.

We all know the importance of public services and public education to communities, families and workers. We need a mayor and council who will support the values of working families, fair wages and benefits, and oppose contracting out and privatization of public services.

We also know that decisions made by School boards have far reaching effects on students, families, and our community.  We need to vote for school trustees who support decent jobs, positive and safe schools and publicly delivered education.

Municipal government touches just about every aspect of our lives; they make decisions about our water and wastewater, recreation, libraries, parks, transit, public education and many other things that affect you and your family every day.

Great municipal governments can make communities stronger, healthier, better places to live, and only a handful of votes can have a huge impact in municipal elections.

That's why it's important to get out and vote in these elections. You can visit the elections information page of the City of Winnipeg website to access voting times and locations, candidate lists and advance voting information.

On October 26, vote for better public services and a Winnipeg we all want!

This week, the Canadian Union of Public Employees (CUPE) Local 500 launched a major advertising campaign encouraging Winnipeg residents to think about the value of their public services and the people who provide them.

The ad campaign called “Winnipeg. It’s Ours.” features members of the community alongside city workers who highlight every-day issues from longer wait times at 311 to potholes to closures of our pools and libraries.

“This campaign is about maintaining and improving the vital public services we all depend on and ensuring that workers have the support they need to deliver these great services to our city,” said CUPE 500 President Gord Delbridge.

CUPE 500 is currently at the negotiating table fighting for improvements to city services and for the workers who provide them. City workers took a strike vote in July 2022, calling on the city to support fair wages and increased staffing so city services aren’t falling behind.

“Services like 311, grass cutting, libraries and pools, and even our own mechanics are struggling because their wages aren’t keeping up with other sectors,” said Delbridge.

“Good people are leaving the city workforce because on top of cuts to services, the staff just don’t feel valued by their employer: our campaign intends to raise awareness about the value these workers give to the city,” added Delbridge.

The CUPE campaign directs the public to yourwinnipeg.ca, where more details about the campaign can be found.

CUPE Local 500 represents approximately 4,900 workers at the City of Winnipeg.

CUPE 500 CAMPAIGN:  A WINNIPEG THAT WORKS FOR YOU 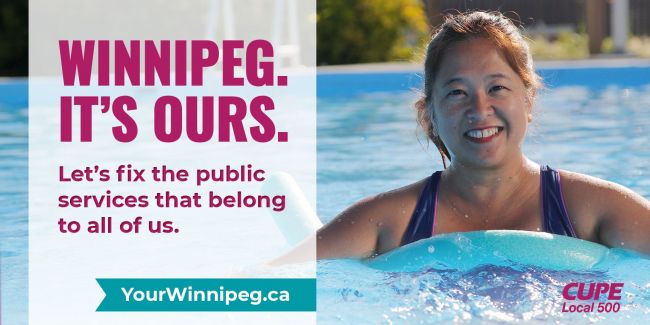 Winnipeg’s front line workers carried our community through the pandemic, but they themselves are falling further and further behind. Winnipeggers expect City Hall to support its own workforce, but we are seeing continued push back against fairness for workers.

The city needs to protect services Winnipeggers count on and support the people who provide them.  People need to see the City take action, now!

CUPE Local 500 is launching a large-scale campaign including radio ads starting on August 22 and TV ads on September 5, coinciding with Labour Day.

This campaign focuses on the value of Winnipeg’s municipal workforce and the public services they provide.

The last three years have been extremely challenging. From the global pandemic to the looming economic downturn and rising costs of living, there has been so much instability and loss.

This fall, citizens of Winnipeg get the opportunity to elect a mayor andcouncil that can focus on growth and renewal. It’s time to turn the corner and start rebuilding our economy and our city. We need a mayor and council that will prioritize building and maintaining quality public services.

The citizens of Winnipeg deserve it!

In addition, CUPE 500 is currently in contract negotiations with the City of Winnipeg.  It’s critical that with rising costs of living they are offered a fair wage increase. Wages aren’t keeping up with inflation and families and services are suffering.

People working in libraries, 311 and other areas are some of the lowest paid municipal workers in the country. Wage parity in our skilled trades are not aligned with other bargaining groups within the City. Due to this and other issues, the Employer is struggling to hire and retain employees. The work they are doing is considered vital, yet the compensation and respect they receive is not in line with that sentiment. It’s time to fix that!

When we think about the kind of city we would like to live in, it should include safe streets, clean drinking water, well maintained parks and reliable recreation programs  that are plentiful and accessible.

If we want quality services, the City needs to pay people fair wages.

There has never been a better time to invest in the services we all count on – and the people who deliver them. That’s good for our services and the economy!

CUPE 500 launched a new radio ad “Longer Wait Times” on August 22. It’s time for the City to invest in the services we all count on – and the people who deliver them. 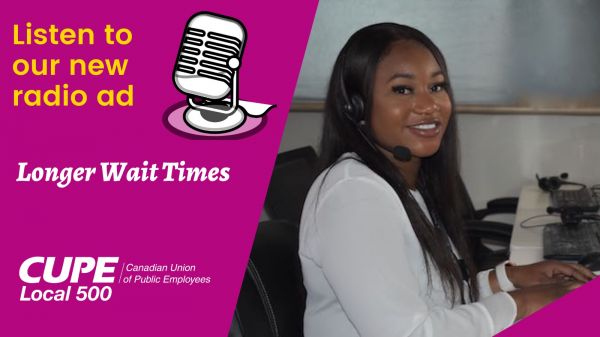 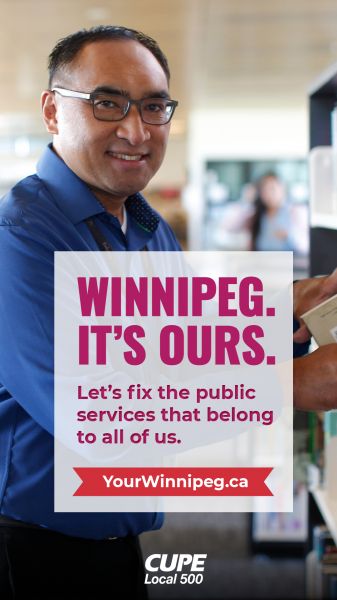 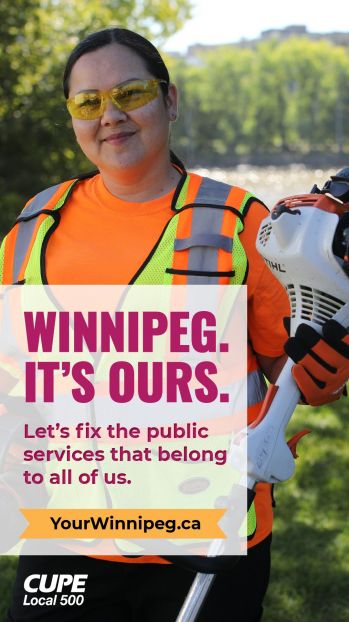